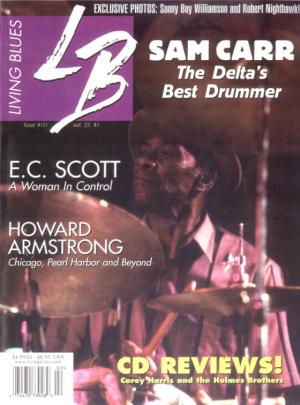 Norman Sylvester was born in Bonita, Louisiana, in 1945 and moved with his family to Portland, Oregon, when he was twelve. After picking up the guitar with his buddy Isaac Scott, he formed his first band in 1969 and has been an important player on the Portland music scene ever since.

As on his previous CDs, 1990′s On The Right Track and 1994′s It Ain’t Nothin’ But A Party, Sylvester “The Boogie Cat” purveys his own brand of blues, blended with soul and funk. He’s supported by a basic unit of keyboardist Janice Scroggins, bassist Rob Shoemaker, and drummer Ashbolt Stewart, but variety comes from augmenting the group at times with as many as five horns, a group of backup vocalists that includes Sylvester’s daughter Lenanne, a middle-school chorus, organist Dover Weinberg, harpist Bill Rhoades, or singer LaRhonda Steele. The generous seventeen-song playlist consists entirely of Sylvester originals. These range from the burbling funk of the opening All The Funk That You Want to the Caribbean feel of Redemption Time, the soulful blues balladry of the title track, and the humor-spiced Honey Do List and Soap Opera Blues (“the only time my woman goes into the kitchen, when she’s lookin’ for the remote control”). The toughest blues sounds come on the harp-backed Cheating Woman. There’s a tribute to the late Paulette Davis on Soul Diva, and Sylvester closes the program on a spiritual note with a touching, but not maudlin, Mother’s Prayer. The set is well recorded, and the booklet features more than a dozen photos of Sylvester with his family and colleagues.

With his tasteful but exuberant musical values and versatility, Norman Sylvester should be better known outside of Portland. Perhaps this CD will help him get some of the recognition his talent warrants.

3 thoughts on “A Family Affair”