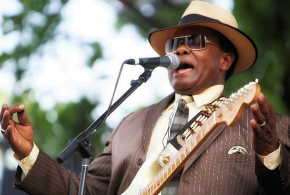 Musicians are used to playing benefits for colleagues with medical needs and no health insurance. But this time, they’re being proactive — they’re playing a benefit concert for a movement that’s designed to get them all covered. If the campaign for single payer health care in Oregon succeeds, musicians should never have to play a fund-raiser for an ailing colleague again.

“Healing the Health Care Blues” is the theme for the Inner City Blues Festival Reunion, scheduled

Singer, songwriter and guitarist Norman Sylvester understands the need first-hand. That’s why he volunteered to organize music and sound for the event. “One of the biggest things that can take you off the planet as far as finances go, is a catastrophic medical emergency,” says Sylvester, who’s spent 40 years on the Portland blues scene.

“I’ve had four major hip surgeries,” he says, “and I was blessed that my wife had a job and I was able to get on her insurance. A self-employed musician couldn’t pay for a $92,000 hip surgery.”

Now, Sylvester, 66, is on Medicare. But this cause goes beyond the personal for a man who plays multiple benefits for community organizations each year and mentored such musicians as Patrick Lamb, Gretchen Mitchell and his daughter, Lenanne Sylvester.

“Where is the money for health care going to come from for a musician who has to haul his equipment across town, play four hours, and gets $300 for the whole band? Health care is this astronomical iceberg, and we’re on the Titanic now.”

Single Payer Campaign, too. An annual event from 1989-2003, the Festival was sponsored by the Portland Rainbow Coalition, which led many campaigns bringing together a multi-racial, multi-cultural alliance.

With its slogan — “Everybody in – Nobody out” — the movement advocates for a system in which “… all Oregonians would be covered for all medically necessary services,” and, according to the Oregon Single Payer Campaign website, “there would be no premiums or deductibles; simply a dedicated tax that everyone pays into, much like Medicare.”

Currently, 18 other states have organizations advocating for comprehensive, no deductible, no co-pay, all-medications included health care. Vermont has already adopted the system.

Sylvester has written and recorded a theme song for the movement called “HealthCare Blues.”