It’s considered a jinx in the performing arts industry to wish someone “good luck” before a show. Instead, it’s customary to say “break a leg.”

But, say a performer was to break their leg, chances are it would put them in such financial straits that it could take years for them to climb out. That’s because many performers can’t afford to buy health insurance. And it’s why more than a dozen blues musicians from Portland are getting together April 14 for a “Healing the Health Care Blues” concert at Melody Ballroom.

The concert is a reunion of the Inner City Blues Festival, a popular annual event that started in 1988 by the Portland Rainbow Coalition. The last concert was held in 2003.

This year’s reunion is a fundraiser for the Oregon Single Payer Campaign, a coalition promoting a universal, affordable health care system for all. Headlining the event will be the Norman Sylvester Band. Sylvester and his band mates are members of Portland-based Musicians Local 99.

The union is endorsing the event. In fact, the American Federation of Musicians was an early endorser of a national campaign promoting a single-payer health care system.

Musicians don’t work a typical 9-to-5 job with health care covered under an employer’s insurance plan, said Bruce Fife, president of Local 99 and an international vice president of the American Federation of Musicians. When Fife was performing decades ago, he had to buy his own health insurance, too. But, he said, pay was much better, he worked a steady five nights a week, and insurance premiums were more affordable.

“Union density in the industry at that time was more than 80 percent,” Fife said. “The union had agreements with booking agents and venues, and musicians could make a good living. Today, most musicians can’t survive playing music alone; they need other jobs to survive.”

Fife said the industry began to unravel starting in 1978, following a court ruling that declared musicians independent contractors. The decision stemmed from a lawsuit the music industry filed against the union.

“It took time for the lawsuit to affect the industry,” Fife said. “But it changed the whole dynamic in so many ways.”

Fife said one of the first things he did as president of the union was to reach out to Kaiser Permanente to acquire health insurance for musicians. He polled members, asking them what would be most beneficial in a health care package. Kaiser determined that it was impossible to provide a health care package because musicians have too many different employers.

“So we turned our focus to single-payer,” Fife said.

Reforming the health care system to a single-payer format would benefit all Oregonians, supporters say, by replacing an expensive and complicated system — dominated by a multitude of private insurance companies — with a single non-profit agency that would collect and distribute funds equitably and fairly. 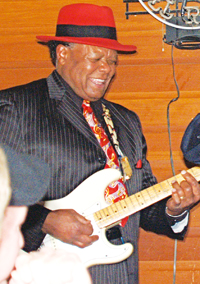 One of the premier bluesmen on the West Coast, Sylvester has shared the stage with B.B. King, Buddy Guy, James Cotton, Junior Wells, Otis Clay, Tower of Power, Peter Frampton and many other national touring stars.

Early in his career, Sylvester needed to work a day job to survive. But even after becoming an established star he relied on his wife’s business to pay for his health insurance.

Sylvester worked for 23 years at P-I-E International  trucking company — starting in the shop, moving to the parts department, and ending up as a purchasing agent.

He recalled a time in 1987 — after performing at the Arlene Schnitzer Concert Hall and partying most of the night with B.B. King — how he was up early the next morning at his Teamster job at P-I-E International.

It was only after the trucking company filed for bankruptcy and closed in 1990 that Sylvester took the bold step of trying to make a living playing music. Prior to that decision he was in a dislocated worker program (that tried to steer him toward accounting), and he relied on the government to pay for his health insurance.

“You learn to deal with pain, or you try home remedies or to diagnose and heal yourself using the Internet,” he said, pointing out that it didn’t take him long to discover that The Mayo Clinic “has a killer web site.”

There was a four-year stretch from 1990 to 1994 that Sylvester said he was under tremendous stress. What if something happened to him? What if his kid falls off the monkey bars at school (and gets hurt)? What if he cracks a tooth?

“One of the biggest health care issues out there is stress,” he said. “Stress can lead to a bunch of other bad things. Having universal health care would take a lot of the stress out of peoples’ lives.”

In 1994, Sylvester married Paula. She operated a small janitorial business and was able to pay for family coverage health insurance.

Today, at 66, Sylvester is in his second year under Medicare, a program that single-payer health care advocates would like to emulate.

Sylvester said Melody Ballroom is donating the venue for the event. Music will be performed upstairs, and tables will be set up downstairs with information about Mad as Hell Doctors, Nurses for Single Payer, Musicians Local 99, the Fair Trade Music campaign, the Diabetes Association, and others.

Food will be for sale, along with a full service bar.

Tickets to the Inner City Blues Festival Reunion are $15 and can be purchased online. You must be 21 or older. Melody Ballroom is located at 615 SE Alder, Portland. Doors open at 6:30 p.m.

For more information about the  Oregon Single Payer Campaign, go to singlepayeroregon.org.